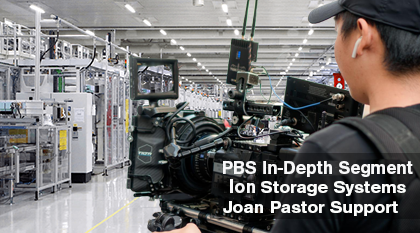 Joan Pastor provides the presentation deck and skills training to qualified start-ups through their venture capital, angel investor, or private equity firms. Based on her long history developing training films with Pepsi, and work in the entertainment industry, she also recently was the consulting advisor involving a collaboration with “In-Depth” television series, on PBS.

Corporations targeting elusive high-earning audiences can often struggle when trying to convey complex messages. PBS is a leading connection to these successful individuals. Their viewers are among America’s most affluent, with over 86% owning at least $250,000 in investments.

PBS approached Ion Storage Systems last year to be a part of their series, focusing on their latest battery technology and advancements being made in electric battery science. Joan was involved in this project in three ways:

1. She and a senior executive of Ion partnered together to oversee the whole project from beginning to end, including working with the PBS staff “In-Depth” to conceive the video segment to air on the television series. A one-minute commercial to be shown on major business channels (i.e.; Fox Business News) was also created.

2. Joan coached the four executives at ion on the interviews that they would be going through. She worked hard with them to develop the script that was ideal for both PBS and Ion executives. Then she successfully coached those to be interviewed on what to say, how to say it, and how to answer q&a during the interviews, while coming across in their own best and natural communication style.

3. The “In-Depth” camera crew was on-site taping all day. Joan was there as well, working directly with both the crew and ion management and staff to ensure the best scenes were taped that successfully profiled all that Ion does, and all they have to offer.

It is important to stress that the successful outcome was due to hard work that went into the co-collaboration between the PBS crew, the Ion executives, and Joan. Stay tuned for updates here and at Dr.Joan Pastor Executive Advisory Services Linkedin CLICK HERE as to when ion will be airing on in-depth, on your local PBS channel. FOR MORE INFORMATION CALL 310-892-0210 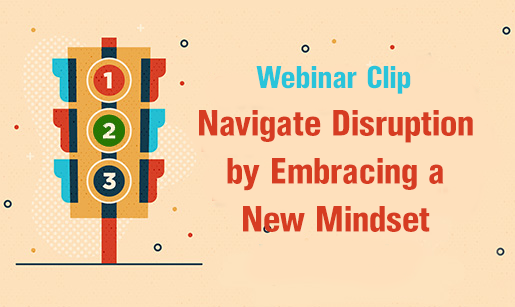 Joan discusses how “We cannot solve our problems with the same thinking we used when we created them.” Her goal in training is to take both leaders and employees to a better place full of innovative solutions. Joan Pastor provides tele-counseling and coaching around the world. If you are in a difficult situation she will diagnose what’s going on and make sure you get the exact help that is needed. 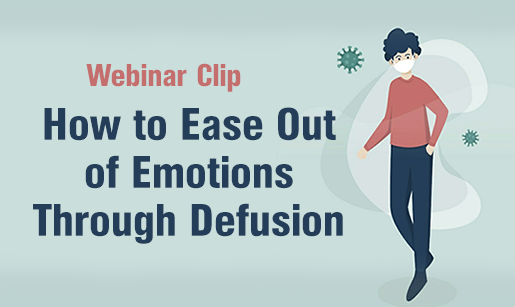 How to Ease out Emotions Through Defusion | Webinar on Managing Emotions

This clip on defusion was taken from part 1 of my free 3-part webinar series on managing emotions during difficult times. Although these tools and strategies were offered in light of the challenges posed by the COVID-19 pandemic, it’s important to understand that you can apply them anytime, anywhere.

Let’s work together! My colleagues and I provide tele-counseling and coaching around the world. If you are in a difficult situation, I will diagnose what’s going on and make sure you get the exact help that is needed. 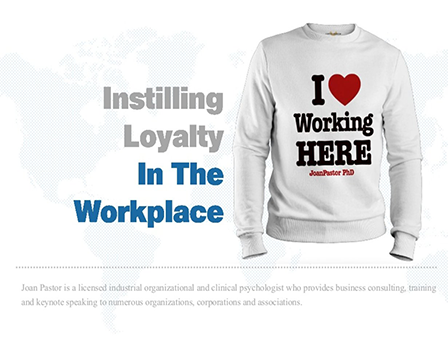 Instilling Loyalty in the Workplace

How do you motivate employees to dedicate themselves to high quality work? How do you create a work setting in which loyalty is a natural byproduct? Does it sound difficult? Well, it’s not impossible and the solutions have nothing to do with wishful thinking. To instill loyalty in the workplace, you must follow a few hard and fast rules. 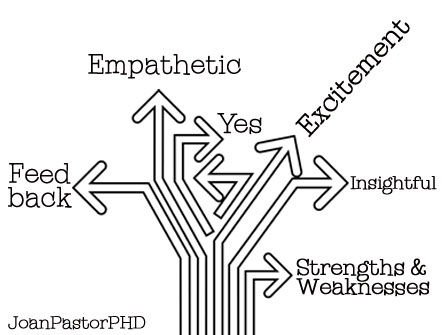 Does Your COACH Pass The Test

Assessments are a powerful tool in the business coach’s arsenal. Done correctly, they provide objective data and feedback that coaches can use to help clients identify opportunities for positive change. They can reveal both the big picture and personal idiosyncrasies that clients may need to either tone down or use to greater advantage. In the right hands, assessments can transform an individual or an entire corporation for the better.

However, done incorrectly—as they too often are—assessments can actually do more harm than good. That’s why prior to selecting a coach, you need to know some facts about the assessment process.

First, let’s talk about what a test battery is. It means that your coach will conduct multiple assessments (more on this shortly). In selecting the most effective battery, a good coach will ensure that:

It’s very important to understand that not all assessments are alike. In fact, some have very little validation. One of the most popular assessments that organizations use today was vetoed for use in research and dissertations for this reason at the graduate school where I received my degree in industrial organizational psychology.

In addition, when it comes to conducting assessments, not all coaches are alike. I strongly believe that anyone using assessments needs to receive very thorough training—years of it, not just weeks or months. Coaches who lack this training will misuse even the best tests. In addition, they will be at the mercy of venders who promote worthless or even harmful assessments. Again, it isn’t enough for coaches to choose the most popular assessments, because some of the weakest and least statistically valid assessments are the most popular today.

Finally, even if an assessment is robust—meaning that its results are truly valid—coaches need to use it effectively. This includes:

With these points in mind, how do you select a coach whose assessments will do good rather than harm? Here are two questions to ask up front:

1. Ask if the coach plans to use a customized test battery or merely administer one or two tests.

If a coach claims that a couple of assessments and an hour of information-gathering will be sufficient to develop an action plan, look for another coach. It takes at least four to five assessments for a coach to develop a well-rounded picture of a client.

In addition to asking how many tests the coach will administer, ask the purpose of each one. Also, ask how each assessment relates directly to your needs or your corporation’s needs.

2. Ask the coach what will happen after the assessments.

Too often, coaches provide the results of an assessment but offer little or no interpretation of these results. (One reason is that assessment reports can be very sophisticated, and many coaches themselves don’t fully understand them.) This is dangerous, because it means that the assessments won’t translate into insight and increased self-awareness. Instead, they have the potential to do serious damage.

In one case involving a Fortune 100 company, a coach gave a female senior executive a very powerful assessment. This woman, while definitely needing improvement in some areas, had worked extremely hard to pull herself up by her bootstraps and to succeed in a challenging job. However, her coach at the time interpreted the assessment results in a very superficial and negative way that left her feeling discouraged. The report itself was very murky, and a negative tone came through in it as well.

When I arrived later to gather information and conduct my own assessments, the woman was very nervous, and it took a great deal of effort on my part to persuade her to agree to go through the assessment process again. She was so pleased this time that she brought me the original assessment that caused her so much pain. I went through it carefully with her, tying it in with the feedback from my own battery of assessments. When she understood the whole picture—both her strengths and the beliefs and behaviors that might be getting in her way—she took ownership of the information. She’s now positive and confident, is clear on what she wants to achieve in her career, and is effectively grooming herself for those next steps.

In another case, a corporation brought in a psychologist and “expert” to assist a department troubled by infighting. The person’s solution was simply to give an assessment to everyone and then tell each participant, in front of the rest of the team, what they were doing right and wrong. There was no discussion on how to change their behavior to resolve differences positively; instead, the coach just got up and left.

The group was shell-shocked, and some members were devastated. Somehow, their top boss was referred to me, and after much debate about inviting a psychologist into their presence, they decided they were willing to try. Following my testing and feedback, the group went from hostile to eager to totally onboard, and the infighting ended. To this day, their now C-Suite-level boss and others from the same original team turn to me when they need to communicate delicate feedback or information, require team coaching, or are preparing for a restructuring.

What to Look For

Good coaches give feedback that is not just accurate and constructive, but also empathetic and insightful—especially when it involves perceived weaknesses. People are excited about learning more about themselves, but many are also nervous about exposing what they deem to be their weaknesses. When coaches give feedback properly, it allows clients to step outside themselves and view themselves as a whole entity. Good coaches discuss weaknesses as openly as strengths, because those very “weaknesses” often have contributed as much to a person’s success as what we call their strengths.

For instance, I have another client who is in a powerful position in a Fortune 500 company, making decisions that impact many other people at the global company. One assessment I gave this client was an emotional intelligence assessment called the MSCEIT. This test reveals how well clients perceive, use, understand, and manage their own emotions as well as the emotions of others. The assessment revealed that he was very weak in accessing and integrating emotion accurately. However, another sophisticated assessment I gave him allowed me to determine that he was highly ethical.

Earlier in his life, this man saw the damage that emotion can cause, and decided to stay focused on reasoning and analysis. This emotional detachment gave him the ability to steadfastly do what he and the corporation agreed was best for the organization as a whole, despite the emotional reactions of others. Combined with his high level of ethics, it allowed him to become very successful. However, it also led to problems. For instance, because he kept his emotions at arm’s length, other people frequently perceived him as doing the same thing to them. In addition, many perceived him as manipulative.

In our work now, we focus on how he can best show his ethical self and learn to experience and show compassion, while allowing others to see that he has no other agenda than doing what is best for the company. He is also learning how to be transparent in appropriate ways, which is encouraging others to do the same in return. It’s been fun and personally heartwarming to watch him unfold within himself and at the same time begin to read people and respond to them more accurately. He still meets with resistance, as his job is to institute major change, but people—including his boss—now better understand where he is coming from, and are joining forces to support him. In the process, they’re learning how to better embrace the disruptions that are necessary for everyone to grow.

Clearly, assessments can be a powerful tool for good—but only when the right person conducts them.

So don’t automatically assume that any coach and any assessment will do the job. Instead, seek out a coach who has years of training in using assessments, will custom-tailor a battery of well-validated assessments to your specific needs, and will translate the results into practical information you can understand and positive steps you can take. Your coaches won’t be shy about testing you… so don’t be hesitant about testing them!