Objective:
Dr. Pastor worked closely with the managing partners of a major U.S. sportswear company to develop and implement a team-based organizational culture throughout many departments in their organization.

Dr. Pastor was originally contacted to provide training for the customer service department, with the goal of resolving conflicts within this group. She led a two-day training program focused on developing a process for building high-performing, collaborative teams. It was quickly noted that there were also some visible internal tensions between Human Resources and other departments. Consequently, the training was initially focused on the development of a structure and process to transform one group, but was quickly expanded to include half of the organization.

Extensive training, strategic planning, executive coaching, competencies development and other key consulting services were provided to assist the company in their organizational change efforts. Dr. Pastor coordinated her efforts with an associated company-wide upgrade in technology, including all computer and telephone systems. 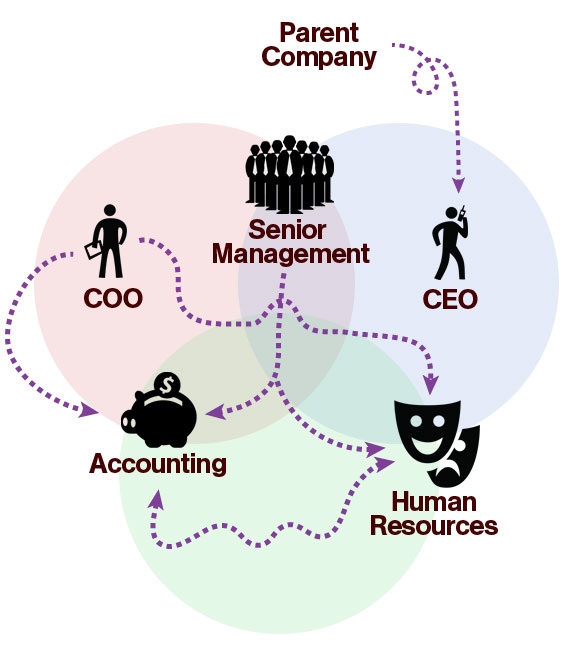 As a first step, Dr. Pastor worked with the executive team to determine their vision and define the strategic objectives of organization as a whole, as well as the expected contributions of specific teams.

Next, she tasked each department to develop their own specific vision, in alignment with the larger organizational objectives. This vision included their anticipated contributions and metrics for measurement. Departments were asked to determine how they would communicate and interact with each other as well as how they would develop essential skills. Popular Team Support Agreements were developed, outlining how teams would interact with each other. The Agreements included standards for behavior and processes to make certain communications are heard and colleagues demonstrate respect for each other. As a result, the Agreements helped to resolve conflicts and establish new guidelines for future interactions.

The departments were also directed to generate their own critical success factors and to determine how to most effectively implement their vision. They identified standards of operation and they prioritized the areas of team focus, all leading to the accomplishment of their goals and the attainment of their vision.

Most business functions chose to supplement their evolutionary process with additional skills training, including stress management and personal development.

———————————————————————————————–
Politics was one key challenge to overcome in moving forward with a comprehensive strategy that involved the entire organization. The CEO was monitored by the family owners in China and he acted as essentially a figurehead. There were two sides to the organization and differing leadership perspectives on each side. The creative side, which included all functions related to clients, was led by the CEO. The side which included all internal, support functions was led by the COO. Dr. Pastor worked with both sides to develop new operational strategies and business processes. However, the CEO and the COO did not get along very well and did not have the same vision for the organization. The goal of the COO was to grow the company and change the culture, while the CEO was not entirely supportive of this effort. It was difficult to achieve a cultural shift, as the idea for change was not generated by the leadership. Unfortunately, the process did not ultimately achieve the buy-in and support of the leadership, as they were reluctant to relinquish control of the company culture and strategies. This type of change was not intuitive to the Chinese family as they wanted to retain the ultimate decision-making and leadership position, so they would not endorse the efforts of the COO to widely implement change. As a result of pressure from the Chinese family, the CEO was not supportive of implementing the process on his merchandising side of the organization.

Although Dr. Pastor engaged the leadership in the re-engineering of a business process, it became very apparent that cross-cultural differences were creating obstacles to progress. The Chinese family of owners placed a representative in the executive training group as essentially a “babysitter”. The inclusion of this family representative created a formal and intimidating training atmosphere. When the process was implemented, it also became clear that some employees did not feel comfortable in a collaborative environment, as they previously worked for decades in a competitive structure and they continued to embrace inter-company competition and preferred to work in a political environment.

In the conduct of the training sessions and employee interviews, Dr. Pastor detected another problem. Employees were not keeping up with advances in technology. Some functions were struggling – including Human Resources and Information Technology. It became very difficult to introduce and implement new IT systems, with a high turnover in IT Directors.

———————————————————————————————
Members of the executive team as well as teams in the individual departments were taught a step-by-step process to help them perform collaboratively to achieve department and organizational goals. Dr. Pastor also trained them to resolve conflicts – so that the conflicts do not become challenges, and impede progress. In the end, everyone was operating with the same rules.

The communication and implementation of organizational changes prompted employees to make a decision – they recognized the need to either “get on board or jump ship”. After fully understanding the new directions and goals of their leaders, many remained but some chose to leave or were asked to leave. It was important to share the same team objectives of embracing collaboration, adding value to the organization and working to drive performance. “Without judgement or blame” – some employees simply maintained a reluctance to change or learn new skills for their jobs.

Simultaneously working with the IT department to assist with their transformation, Dr. Pastor led them in the establishment of performance goals, including the financial goal of controlling costs. Noting that, “if there is conflict, there will not be accomplishments,” she also trained the IT department to overcome conflict and taught them valuable negotiation skills.

Working with the Human Resources department, Dr. Pastor developed measures to solve their problems. A key measurable was to limit HR’s role in management and evaluation of employees by comprehensively training managers to effectively provide their own constructive or negative feedback. The role of HR was limited to support in the room of the feedback only in severe cases that required a witness. Previously, the managers did not like to provide constructive feedback and they relied upon the HR department to take on this role. Unfortunately, the Human Resources department developed a reputation as an extension and puppet of the management, elevating them in the estimation of management, but creating tension with other departments. Since this was a significant change, several members of the HR team were resistant to the new roles – some departed the company and some were asked to leave. Eventually, a supportive team developed in HR and the director became very involved in managing the change and organizational development initiatives. She became an asset to the COO in his efforts to promote the changes.

Measurable results were achieved by the individual teams. One example is the Accounting Team. The Controller, worked for the COO on the internal support function side of the organization. This team embraced the training and appreciated the opportunity to improve.

They created charts to demonstrate their personalities and discussed how they might work better together. The team discussed the dynamics of relationships and motivations, they enthusiastically posted their key department visions and they also engaged in quarterly meetings to determine their progress and revisit the agreements they made with each other. The team diligently used the comprehensive binders, filled with materials that Dr. Pastor developed, to guide their implementation of the change strategies.

· As a result of the organizational change process the internal support function side implemented performance metrics with all teams that went through training. This was extremely useful in measuring their progress.

· The internal support function side began to operate at a higher level and regularly used performance to identify new opportunities and advancements in the organization.

· This team was operating at much higher levels, measuring retention and defining career paths.

· The Accounting Team used the process to define how they could improve and become more engaged.

· As the Controller implemented the changes, her team became more goal and results-oriented.

· One revelation was that the COO demonstrated to the internal support function side of the organization that he was protecting them and had their best interests in mind. He changed his management style and learned to work effectively with his own executive team.

After the organizational change process was completed and implemented, there was a demonstrated imbalance in the company performance. Significant change had been implemented successfully within one side of the organization. Consequently, the company worked hard to even out the balance, which also led to a realigning of their vision as a company as a provider to other brands rather than being their own brand. This has proved to be a very profitable alternative, and is still the ongoing mission.